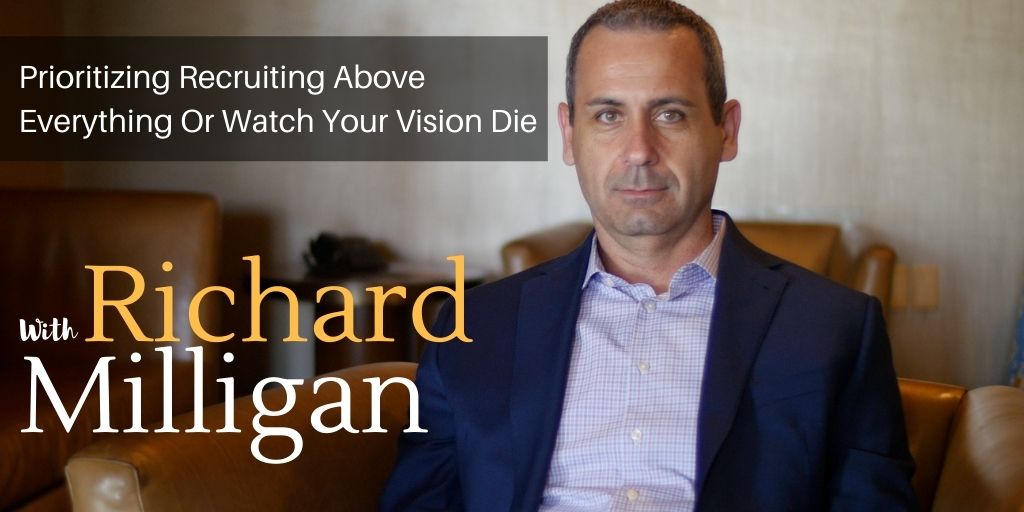 Prioritizing Recruiting Above Everything Or Watch Your Vision Die

So the big question is this, how do recruiting leaders like us who have 12 to 15 other job responsibilities win at this game of recruiting? How do we build a system that allows us to recruit effectively in a minimal amount of time while motivating recruits towards meaningful change? That is the question and this podcast will give you the answers. My name is Richard Milligan and welcome to Recruiting Conversations.

Hey everybody, welcome back to another recruiting conversations, it’s your host Richard Milligan and i’m going to share with you a behind the scenes in a recent coaching session that I had, every once in a while i get on a roll in a coaching session where i get kind of on my on my stage, in front of my pulpit, one of those moments where you’re a little fiery and you’re ready to actually deliver a message to somebody, and I have one of those messages that i delivered recently to a recruiting leader, and the setup for this is very typical, look the recruiting leader has the most difficult job in any business, and it’s because they wear so many hats, then then they’re also responsible for recruiting and so since recruiting is not front and center all the time, It’s not something that is of essence to putting the deal together that’s immediately in front of them or putting the fire out that is in their inbox whether that be email or voicemail,, or text, or wherever, then recruiting gets pushed over and over and over again there’s always a day of reckoning with a lack of recruiting because teams churn people. I mean some industries as much as 30 percent of salespeople leave every single year you take a team of 20 people and over the course of three or four years, if you’re not recruiting you’re suddenly in a position where you are no longer a leader.

So, the struggle is real and that there’s so many things to do for a leader who also recruits that recruiting goes on the back burner, and now more than ever because the season is busy, right? I mean, we’re juggling more things now, trying to work in a virtual environment, with this season of covid depending on what industry in you have an enormous workload if you’re in real estate, or in mortgages, or in insurance if you’re not you’re in some other industry, there’s more pressure on you to make things happen if you’re on the sales side. So, the struggle is real for every recruiting leader to carve out time, to do what they know is necessary to be successful, and it’s this consistent behavior that’s in alignment with our long-term goals, it’s that which creates sustainable success. Consistent behavior in alignment with our long-term goals. So, in this moment I have a leader that I’m coaching, that has had a recent struggle of just making time to recruit to put on his calendar and not just manage to do that, but allocate to that, right? There’s a difference between time management and time allocation time management assumes that you can manage time and you can’t manage time you can allocate it if you’re a recruiting leader you’re trying to manage time you are going to get wrapped up in everything around you because it’s always going to come in between you and ultimately what you need to accomplish what you want to accomplish to move your larger vision of growth forward. I have some crazy personal stories around this and the little clip I’m going to share with you won’t actually share some of those stories. I’ll share one with you here now.

I remember this season of struggle, where i was always setting these big goals, and then failing the goal and inevitably i felt so frustrated because the operational component of running a team was always getting in the way, there was always a fire to put out. So, I began to evaluate everything and when I say evaluate everything like where’s my office located at, what are the things in my office that are distractions for me, why can’t i seem to get over this hurdle, and just do the things that i know i want to do, that i need to do that are important to me. I looked at my office one day and realized that my office location, inside the larger office was in front of a hallway leading to my operations team. Which meant that anytime someone had an issue on the sales side and needed to go talk to operations they would walk right by my office. Now, my office set up was that I had a french glass door and I had these two big windows that were pained windows on either side of the doors so there was no hiding in my office. You, if you came up to my office and I wasn’t on the phone or you know even if I was on the phone there were times where people would just walk in. It was hard for me to hide in that environment to just get things done because people saw me available, I was the leader of the team that would come into my office to ask me the question to pose a scenario to put out help put out the fire, whatever it was. So, i went to this process and just said i’m going to be intentional about carving out my time and so i remember being on the phone one day i literally was on the phone when this happened i hear a knock on my door and I kind of put my hand up i didn’t even turn towards this door because my computer was facing away from the door, I kind of put my hand up as to stop, and I pointed to my ears because I was on the phone and just kept talking, and I heard the door creak open, and I heard someone sat down on the chair on the other side of my desk from me and just immediately, I’m like a little bit frustrated in this situation because i’m in the middle of a conversation with the recruit, I know this conversation is going to take some time to actually have, and that person sat in that chair, until i got off the phone to pose a question to me wasn’t a big question. I remember it being that memorable of an issue or anything like that they just one of my time, okay?

So, i’m like how do i solve this problem i thought you know i’ll put a sign on the door because in this moment i’m like in the middle of my recruiting efforts i look in my corner off in the corner of my office there’s a cardboard box, I take my scissors over cut the lid off the cardboard box take a marker, and write in meeting take a piece of scotch tape i walk to my door my my french door with the glass panes tape it on there i close the door and i go back to work i’m back to my recruiting efforts, I hear the door open with the sign on the door saying in meeting while i’m on the phone again and someone sits down in my office. So, i’m at this place now where i’m like really frustrated because i’m like i got to solve this problem, i’m super driven to meet my goals for the year the only way i’m going to eat my goals if i grow my team, the only way i’m going to actually grow my team is if i’m actually intentional in the behaviors or the things that i’m doing in my day, I mean i know these things so i created a sitting area outside my chair outside my office it had a chair, it had a short table, on the table it actually had magazines, and i got an hour a 30 minute half hour glass, that was clear it was about a foot and a half tall and then it had red sand. I still have that to this day, and i set that on the table when i time blocked my recruiting efforts. I would take that 30 minute sand glass that had red sand and it was clear and I would turn it upside down. I would sit on the table and I had this conversation with the team. If that’s in place I’m doing the one thing that I have to do this year in order to accomplish my larger vision which is to grow our team and to grow this market, it still happened. People wouldn’t sit in the chair, people would look at the half hour glass with the sand in it, would still come up to my door and knock on my door, if they didn’t think that i was on the phone. So, they’re going to think about this i’m like i need to solve this problem i relocated my office so i wasn’t in that hallway it still happened at one point i drive down the staples in the middle of the day i get this whiteboard easel it’s about five feet tall the easel is the whiteboard is about three feet tall by four feet tall i mean it’s a big whiteboard you literally would have actually had to move the easel and the whiteboard to get into my office because i placed that bad boy right in front of my door, when i was doing my recruiting efforts, after i moved my office and i would write on that board what i was doing and if they needed something there was a place for them to actually write something below the message, so that i knew that when i walked out of my office after being intentional with what i was doing in terms of my recruiting energies that i would see the message and be able to connect with them, and finally in that moment I solved that problem.

So, for you, the recruiting leader, in this next little clip, listen to this. It’ll be impactful. You have to figure out how to solve this larger problem which is how do you carve out time to get to your recruiting efforts, let’s go to the clipboard now.

I’m back, I hope you found some value in that I pray that there’s a part of this that you will actually apply to what you’re doing as a recruiting leader. If you’ve got a big vision for your team, the only way that you’re going to be able to accomplish that larger vision is through you being intentional in your energies, and your efforts, and your actions, and your behaviors around recruiting. You will have to solve this problem, when you solve this problem, this battle’s won. So, all the best to you thanks for checking out recruiting conversations today. Look forward to bringing one to you again soon have a great week everybody

Want more recruiting conversations? You can register for my weekly email at 4Crecruiting. com. If you need help creating your own unique recruiting system, you can book a time with me